It was a perfect day for cycling. The sky was cloudy, which was not bad considering it provided shades from the blazing sun. The fact that it did not rain the day before also heightened our anticipation that the trail was gonna be in good condition. Yes, it was indeed a perfect day for a good ride.


Almost all the geeks arrived at the foothill of Bukit Cermin by 8:00 am. Bukit Cermin veteran (2nd time) John aka Rooster and George aka Iron Man leads the way. The first kilometer was uphill all the way until we reached the 2nd tower (DIGI) located near an Indian Temple. Overall, the uphill ride (or push) was tolerable because the trail was in good condition and that some part of it cement/tar trail. 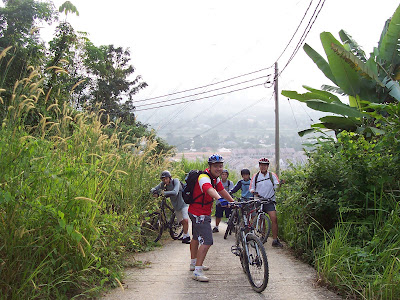 It was uphill all the way in beginning.


I must admit, initially I was kinda disappointed with the trail as it did not look scenic at the beginning, and I personally do not like to ride on a cement trail. No kick! However, after we passed by the DIGI tower, things began to look more optimistic. Immediately after the DIGI tower, we were greeted by a 6-7 feet downhill slope. Now this was more of my kinda liking. The trail now consisted of off-road trail surrounded by rubber trees.

There were a few forks and turns, and we all decided to explore the trail but all leading to dead ends. The trails here kinda reminded me of the Bukit Kiara trails. Heaps of single tracks and all surrounded by rubber trees. Even the smell was like Bukit Kiara with the stinking latex smell. But of course we were lucky as it didn't rained the day before and so no mozzies sucking out our precious blood. So we all decided to turn and follow back the trail which Iron Man and Rooster went on their first hash about a month ago. 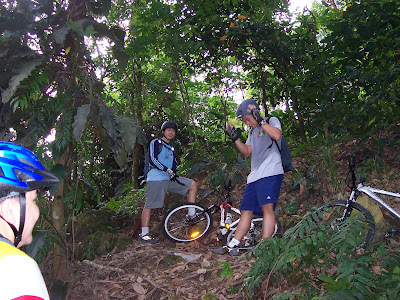 
On our way back, we managed to bumped into 2 fellow riders. One of them was Hisham, the person who created most of the downhill trails here in Bukit Cermin. It was at this point that Hisham showed us the way to the downhill trails.... Sweet! 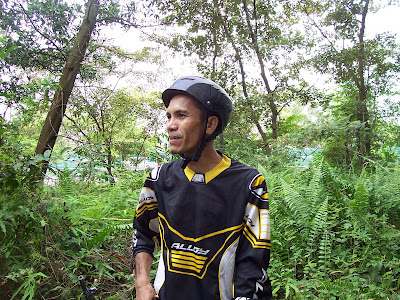 Hisham - This dude was the one who created the trails here. RESPECT!


Hisham took us through the remaining of the trails consisting of a lot of steep downhill rides, which can be a bit technical for newbies like us. However, Hisham's effortless decent down these trails gave some of us a boost of confidence to tackle these steep downhill ride. There have been a few accidents or near-accidents during this ride. One was Iron Man's near-fall but he saved himself by hugging on to a tree (Hindustan film style). See video below.


Iron Man - A romantic moment with the Rubber Tree.

There was also a wooden ramp made by Hisham and his friends. Seri Naga aka 5K decided to give it a try at jumping off the ramp. After summoning all his courage, he made 3 attempts but …. CHICKENED OUT each time when he was about to reach the ramp. Heh… heh…!


Seri Naga - Chickened out in the last minute.

After the ramp, we all come across a wooden bridge. Looked easy enough to cross and Rooster was the first geek to try to cross it. Unlike Iron Man, who was lucky enough to be saved by hugging on to a rubber tree, our dear John (Rooster) was not so lucky and fell almost 7-10 feet down the gorge. Luckily he was unhurt. Apparently he tried to cling on to a tree when he fell but could not reach it. This incident made the other geeks more cautious when crossing the bridge and we all decided to push our bikes instead of riding over it.

After the bridge, there was some cool downhill rides all the way until the end when we caught up with the 2 downhill dudes. One of them was Apai and he was kind enough to demonstrate to us on how to jump a steep slope. His first attempt was successful but Apai was not satisfied and decided to go for a 2nd attempt. This time he went too fast and lost control of his bike and crashed into a tree. The crash was quite hard and it knocked Apai out for a few seconds. Luckily no serious injuries (that was what we all thought) and he was back on his feet after 10-15 minutes or so. 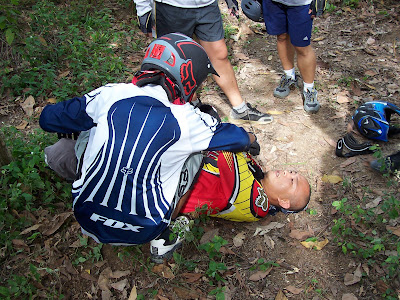 Apai almost knock out after hitting the tree.

Apai - Almost knocked out after a head-on collision with a tree.
While Apai was catching his breath he let us try out his downhill bike (at least RM10K). Seri Naga gave it a try (3 tries to be exact) and it was totally awesome. Jumping from a downhill bike definitely felt a lot more different and you get more control on the bike due to its weight and handle bar size.

Overall, Bukit cermin was a great ride. The uphill was not that hard and ridable for a fit rider. The downhills were a bit steep and it is advisable, to be handled by a relatively experience rider. This trail was an alternative to Kiara, which may be too technical and crowded on the weekends. Bukit Cermin is a must for downhill enthusiast!

Videos and Photos
Here are some statistics:


The Uninjured Geeks who survived this ride:
Posted by Seri Naga at 16:41