Basically a nice non-technical Oil Palm Estate trail with minor climbs and nice long downhills! There are several natural jump points that can be improved. But since this is a private estate, not a good idea to start modifying. Very strange, there were hardly any mosquitoes! LOL.

What I learned about jumping in Kiara

When I got up there... looking at the tracks and ramps what popped in to my mind was "not today! I am not fit enough, my bike not suitable and all...

After a while... after sitting and mingling with a few guys there. And also jack telling about his jump and all.. i said to myself ".....what the heck just go down the trails and see what happens..."

So I went down I skipped the 1st ramp. Its wooden made. looks like a half-done bridge... and the landing also doesn't look good to me. I then picked up speed come to the next ramp. This one actually leading to another trail which I don't know where to. Skipped it. Then the next ramp... without thinking I just jump! Dunno if it was a good land but i can feel I was in the air for a moment. Quite high I think. It felt good. Damn! I did the same for the next few. I was really close to orgasm (symbolic only)... I wanted to go on but no more ramps.

I decided to go back up for another round or so. Jack and Naga is still up there. Dunno where rest were...maybe they have gone down. I just thought maybe this time can jump higher and faster. On the way up I overheard these other guys. I supposed seniors of Kiara, advising some other newbies "engkau kena tarik sikit.. bila dah naik tu jgn lean forward and bla...bla..bla" without realizing it actually lingers in my head. Which after that happened to be poison to my jumps. I fell! I don't wanna care about the pain and wounds yet. Just not yet. I must go again. I just went back up and tried again and fell again. "Hmmmm.... nevermind. Try again" At that time I can feel my neck starting to get stiffed...and painful.

I wanted to try again but I suddenly realized that I still have my handle bar-end fixed and its pointing upwards... "O man... that was a very damn stupid and silly of me!! its so dangerous. I could get serious injury from it poking into my face or chest!!" So I called it a day. On the way down I kept thnking what was wrong with the 2nd and 3rd attempt.... I then realized that in the 2nd and 3rd atempt I was not natural.. not going with the flow. I was trying to think and trying to remember and do what those seniors were advising the newbies.

So I guess with this lesson learned I should be able to jump successfully next round!! (without the bar-end la..)
Posted by Unknown at 17:15 5 comments:

I Did It! I Jumped The Jumps in Bukit Kiara!!!

After watching the videos from Naga's album, it scared the shit out of me! LOL!!!

I think Joe The Oracle will be posting the trail tracks and information later. In the meantime, see Naga's photo album or you can read my blog post, I Did It! I Jumped The Jumps in Bukit Kiara!!!
Posted by Jack Hii at 22:38 1 comment:

It’s a fine day to bike. Yes another weekend another ride. This time only 2 geeks can make it for the ride, Seri Naga and Henry. We decide to do Kiara this time and meet up at the TTDI guard house entrance.
Our ride started at 9.30am, all the way up to the water pump house and tried part of the 4K trail. After reaching the cross road we decided to explore another trail which later we found out to be part of the 2K trail. A good downhill ride with a lot of switchback. We did not do the entire loop and come back to the cross road again and we met up with 2 downhill riders Wan and Rizal. Wan is the dude who build the Great Wall of Kiara and Rizal is one of the top 5 Downhill riders in Malaysia. 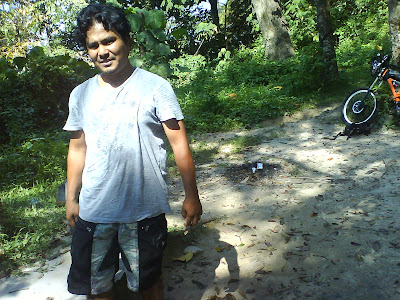 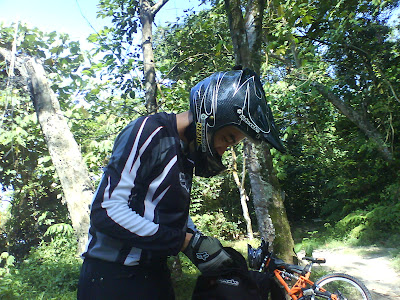 We joined Wan and Rizal on the ascend to the Twin Towers trail. This is where the downhill dudes do their jumping and all sorts of stunts. Rizal showed us how he tackle some cool jumps and also demonstrate how to jump on a ramp. Man he is real fast. We spend nearly 30 minutes watching Rizal did jump after jump. Apparently this is how they practice and perfected their jumps. 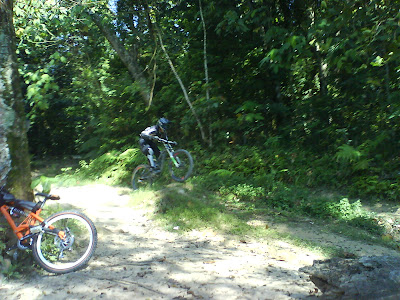 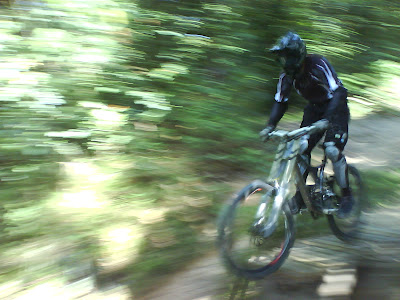 Rizal jumping off the wooden ramp

After watching how the downhill dudes do their thingie, we headed back. The downhill ride on the Twin Peaks trail is superb with heaps of jumping ramps. After reaching back to the cross road, we met up with another rider Kah Foo. He took us to the complete 2K trail. Another superb downhill ride all the way with a lot of switchback. We also did the Carnival trail on the way back with Kah Foo and ended our ride in the TTDI park at the bike wash area. 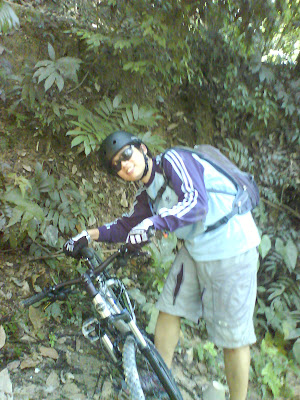 Henry after falling somewhere at The Carnival trail

The downhill ride here is much longer than Bukit Cermin. Overall there are more stuff to explore here compared to Bukit Cermin and you also have more riders here which can be helpful when asking for directions or in case you get lost in the middle of the trail. I have been riding in Kiara at least 7 times already and still haven’t explored 70% of the trail here.

Overall a must for every geek to at least try out Kiara once in their riding lifetime. It’s also a good training ground to increase one’s stamina and riding skills.