"Where to this Saturday?" This is what everyone asked every week. Well, last week, I thought of doing something different. I looked through the maps provided by Malsingmaps (thank you MalsingMaps... :-) to look for MTB tracks, hash or bash.

I identified a few from the maps, that I thought we should explore to see if these trails were in cycle-able conditions or not. They were:
I printed a copy of each of the maps and showed it to the geeks on Saturday, the day of our hash. We met up at the Rumah Ku restaurant, but it was closed during the Puasa month. So we adjourned to one of the coffee shop in Jalan Bahagia, we called "London Fried Rice" coffee shop. During breakfast, we unanimously decided to go to the Bukit Cahaya trails next to Kayangan Heights.

When we reached Bukit Cahaya, we were disappointed. The trails as indicated in the maps had given way to housing developments. So we decided to move on to the next trail, the Puncak Perdana Trail.

Driving along the Puncak Alam road, we could not locate the start of the trail as indicated in the map. So we decided to move on to the next one on the list, the Empangan Subang trails.

After driving along Jalan Seri Jaya, we could not locate the trail either. Joe the Oracle managed to consult his GPS device and we managed to locate what was an entrance to a house as the start of the trail. We believed that the trails were long gone and that the maps needed updating... LOL.

After spending the better part of the morning searching for trails, we decided to give up on our search and to head for the Rubber Research Institute for some cycling time!

On our way out, we managed to spot the entrance to the Puncak Perdana trails... or so we thought... :-) So we doubled back and parked in the car park next to UiTM.

At that point we were just dying to get out and ride.... LOL. 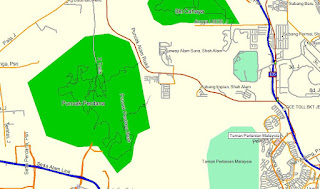 We set out from the UiTM car park and rode to the "entrance" of the trail, which lead to a steep hill with loose rocks making it a difficult climb.

Overall, the Puncak Perdana trail was littered with land slide covering parts of the trail. The trail had turned into a cow herding trail with cow dung deposits along it. At certain parts, there were blue coloured spent shotgun shells. Also, we discovered that half of the land area designated as Puncak Perdana had been converted into a residential development project. 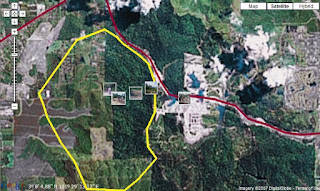 As Iron Man George kept pointing out, Daniel the Bull's housing estate had cannibalised more than half of Puncak Perdana! It so happens, Daniel bought a double storey house there... LOL...

Further along the way, we encountered dead ends upon dead ends. We tried to cut through the brushes and undergrowths unsuccessfully using tree branches as "hatchet". The undergrowths were thick and has completely covered and hidden the trail. The trail was a "botak" trail. We were cycling directly under the hot sun. The ride took a lot out of us and after unsuccessfully trying to find any ridable trail, we decided that we had enough and decided to head back.

I don't think we will ever head back to the Puncak Perdana trail again... LOL. As for the Bukit Langong trail in Rawang and the Ijok Trail, we will explore them another time. The next time, we will bring along several hatchets... LOL...

Summary:
A call to one mountain biker acquaintance, Mr Zaidi (aka Mr Beskal) and what do you know me and Henry got an invitation to cycle to Lubuk Tedung / Kuala Sleh. I have no idea where this place is but Zaidi told us to wait at Zoo Negara entrance at 8pm. Apparently there is this forum ‘Jom Kayuh’ and someone is organizing a ride there.

We arrived at the Zoo Negara entrance around 8 am and met up with Rahmat who will be the hare for today’s ride. We were joined by another 10 riders later and we started cycling around 8.45am toward Kampung Kemensah.

To summarize the intensity of the ride, I would rate this the toughest trail I have ever encountered. The beginning of the trail consist of a lot of steep climbs and the trail condition is full of gutters and muddy pits. So one must expect to come of out this trail with mud stuck on the wheels. I would say at least 35% of the ride consist of pushing due to the trail conditions. One fellow rider, Ong from Fakawi Tribe teach me and Henry some trail maintenance by digging a drain to drain out water from the mud puddle. Not that fun riding with too much water splashing your eyes :-) 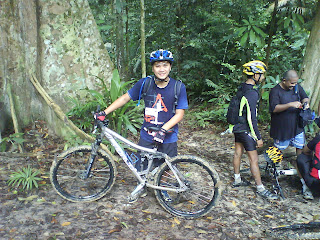 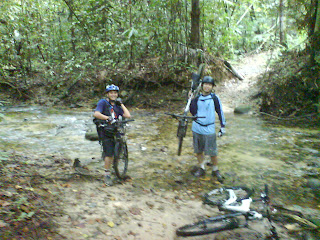 The other half of the ride is much easier with some good down hills which some can be quite technical. We have a few fall and it was probably in one of this fall Henry lost his speedometer. There are at least 3 stream crossing that we have to make before we reach a river which I think is call Sg Sleh. A very scenic river , deep enough to dive into and the surrounding area is suitable for camping. 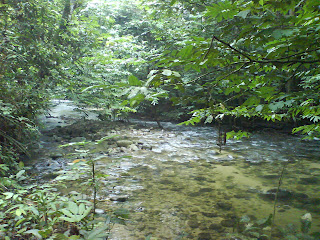 After a good rest in the scenic river, we try to check out an old railway track but the trail leading there has been overgrown and not accessible by bikes so we turned back and rode all the way back from where we started. 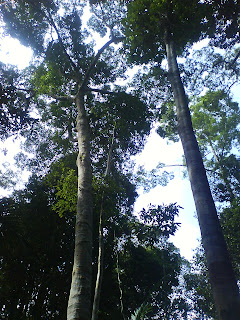 Overall I would rate this the best and hardest trail I have ever been to. We started our ride around 8.45am and only reach back to civilization around 3 pm. This is also my longest ride so far. This trail is well worth the effort but I won’t recommend this trail for newbie as it’s very tough. To rate it in terms of difficulty, I would say it’s like riding Steriod hill in FRIM 3 times. 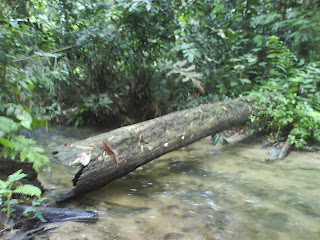 Total Distance Traveled:
Unknown but estimate to be around 15-20km back and forth.
(Henry lost his odometer while my GPS can’t receive the signal in the thick forest canopy)