Another Trip to Sg. Pening-Pening 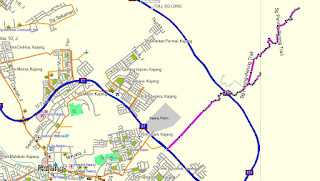 Description:
Quite an interesting trip this time around. Everyone assembled in a mamak coffee shop close to the Giant Superstore in Kajang at about 9:00am.

First off, we get to see Joe with his newly acquired Proton T-Bolt. Unfortunately or fortunately, while testing the bike, the joint holding the derailleur to the frame broke. So the Rooster and the Tracker tried to help out by trying to shorten the chain to at least enable Joe to ride his bike, albeit at a constant single speed. But the thought of cycling Sg. Pening-Pening on a single speed is daunting. However, I must say that I have to tapek (salute) Joe for being able to make it all the way, minus the bitching... LOL.

As soon as we made it to the abandoned Kajang Firing Range, I had a puncture on my front tire, which was quickly fixed. After that we reached the section after the farm shed to prepared for a long push uphill. This was when the bitching started.... hahahaha...

With the exception of Henry, Naga, Edwin and me, the rest had never been on this trail before. All in all, everyone made it to the top and beyond. After speaking to some rubber tappers, we were thinking of cycling all the way in and into the Nirvana trail and from there take the main road to loop back to Kajang Giant.

Unfortunately, some of us have an appointment and we all decided to turn back and head back out. The return leg was, of course, downhill all the way! It was exhilarating and adrenalin pumping good! There were a few non-serious downhill falls, with the most notable being Sean jumping over his bike as it slid and twisted on the front tire. The front brake cable snapped and he had to depend on his rear brake the rest of the way. I guess it is at this point that Sean earned his nick, the Twister! LOL!!!

All in all, I think everyone enjoyed themselves albeit some comments about the trail being too pushy and not enough cycling... LOL. For me, I felt that it was an excellent ride! We shall make it all the way to Nirvana the next round... :-)

Some videos and photos from the geeks:
The Pening-Pening Geeks:
Previous Blog Post:
Thank You: