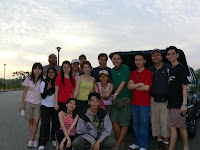 Jerangkang is the perfect place for the trip as it offers 2 camping spot, 1 is next to the river with toilet facilities (no water though) and some pondok (hut) plus seating area is available too. The other is about 10 minutes walk on a trail up hill next to the waterfall.

We decided to leave wee early morning with the plan of meeting up at 5am just before the Gombak toll into the Karak highway. It took me longer than I thought to load up all the food stuff and utensils into my truck, then I off to pick up Medic who is in charge of sourcing for camping equipments. After loading all the equipments she had (e.g. canopy, tents, gas stove, etc.) into my truck, we realised that perhaps, we had packed too much... hahaha... so anyhow, we are behind time and decided to move on to get Sky and 10.60 along the way.

By the time we reached the rendezvous point, its almost 5.45am, we meet up the others, showed them our over equipped truck and distributed some weights. Taking a quick breakfast, we move on with our journey at about 6.15am. As the sunrise and more light appears, the dark surrounding of the highway especially after Karak turned into nice scenic morning view. Parts of the highway are covered with mist, winding the window and feeling that morning breeze is just wonderful. 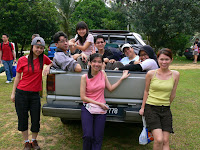 Within 2 hours plus, we are have arrived at Sri Jaya in Maran where we packed our lunch and meet up with the guy whom is supposed to transfers some of the guys into Jerangkang. Well, you see from the main road to Jerangkang, you need to go through about 16km of reasonable offroad double trail and only my truck and Smokie's Kembara can make it,. Therefore Tau Foo Far and Cher's passengers had to get the services of a local uncle whom charge RM35 per pax for a 2 way transfer on his older Ford Ranger which he sped through the offroad trail like a highway.
This is Smokie's first offroad experience and I didn't want to stress up my truck too much too, we were going slowly trying hard to catch up with the uncle. 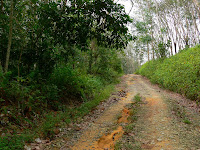 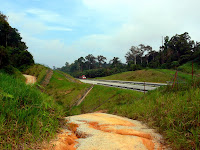 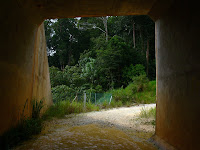 After 16km of offroad, some tiny river crossing (which looks like tiny longkang or pot holes in the video) we finally arrived at the base camp. We hurried to setup, identifying our camping grounds, then transferring all the stuff to the campsite. Many of us then had our first chance of setting up our own tent while boy scouts Lohti and 10.60 are busy chopping and gathering woods while Sky is busy setting up our campfire pit. The rest then tried to figured out how in the world does the canopy works, hehe... 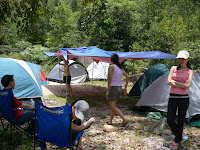 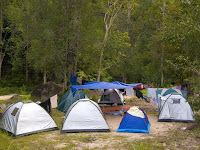 After sweating out like crazy and burning ourselves in the sun, we decided it was time for a nice cool dip at the inviting waterfall. So we got everyone and hike up the 10 mins trail to the waterfall. We were rewarded with a green crystal pool of clear, cooling water. It was fantastic, the pool is big enough to swim around the water is cooling with shades of trees surrounding it and a little sand pile in the middle where you can sit and just enjoy the scenery as the water flows by you. We then did another 15 mins hike up a small trail through the secondary jungle next to the waterfall to another few levels of waterfall higher for another cool dip before calling it a day. 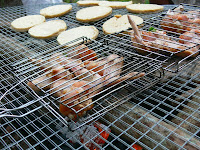 We got a rude shock when we got back to the camp, tents are intact but our rubbish bag got rampaged, we believed that some animals have gone through the rubbish for food, a lesson in camping, hang those rubbish high up! Later we discovered its actually 2 stray dogs living nearby. Anyhow, worried that it might rain, we quickly got the fire started and move on to our evening's bbq.

We spend the night star gazing, Micol claimed she saw 5 shooting stars and I finally managed to see 1 before calling it a night. Oh ya, the uncle whom provided the transport did came by that night to invite Lohti to hunt for foxes, but its was pretty late but somehow he managed to get a few trial shots of the rifle ;), lucky no one got hurt, hehe...

Next morning, we got up early to cook breakfast before doing a final dip at the river next to the campsite for our last chance to enjoy the inviting Jerangkang falls. We got to a nice flow on the river where we can sit 4 in a row and enjoy the spa like experience of nice massages on our back ;). We then packed up and made sure we take all of our rubbish along with us out of Jerangkang and stopped for lunch and some nice special tarts in Sri Jaya before heading home. For most of the first timer and amateur like myself, this is a great place for camping or like how we term ours as an introduction for city slicker's to nature! Best part is we had great company, all 15 of us, whom really did not mind helping out and everyone seems to be finding work to do. So, what more can we asked for, great waterfall, great company, it was a great camping experience for us few geeks ;).
Posted by cupnoodles at 22:19

More on Lohti and the shotgun... six rounds fired in the dead of the night and still the sleeping beauties slept on undisturbed. The next morning, I noticed that the "targets" were still lined up nicely on a rock: a few empty tins and a couple of "empty" butane canisters. Lucky thing he didn't hit the butane, there might have been enough left in them to create quite a bang.

Wah!!! Being able to see the shooting stars made the trip really really worthwhile.

Hi cupnoodles!
It seem like a great camping journey.
However, I just wonder whether you have the number for the four wheel drive driver. Mybe you can email to me. boon.hbh@gmail.com